From Friday to Sunday, the Old Market Square becomes a pop-up puppet village with puppeteers from all over the world. Look out for street theatre, walkabouts, fantastical mechanical animals, puppets as tall as houses, workshops, music and lots more – all for FREE.

Festive Road go walkabout with their giant pedal-powered creatures. From 11.30am, throughout the day (also can be seen Saturday)

Lempen Puppet Theatre‘s The Amazing Thing – Storyteller Peter Grimm opens the box to find the ‘Thing” which takes him on an unusual journey, with puppets and live music. 10am, 1pm, 5.30pm, City Arts Dome

Indigo Moon‘s Mermarella – Puppetry and shadow theatre shape-shifts the Cinderella story into the salty-green, underwater world of the sea. 10am, 1.00pm, 5.30pm (also performing Saturday with a magical interactive installation from Saturday eve and Sunday)

Thingumajig Theatre‘s Hippochondriac – A giant, mechanical hippo is feeling under the weather; he and his doctor reveal the cause of his malaise in this hilarious walkabout show. 10.45am, 1.45pm, 5pm

Ola Muchin’s Magic Show – Featuring world-renowned magician, Osvaldo Drevno with his outlandish and incredible illusions. His magic is so unpredictable that sometimes even Osvaldo doesn’t know how it will end. 11.30am, 2.15pm, 4.30pm (also performing Saturday and Sunday), City Arts Dome.

The Budapest Marionettes – A host of marionettes present a series of short stories accompanied by music to delight audiences of all ages. 12pm, 2.30pm, 4.30pm (also performing Saturday and Sunday)

Mandinga Arts, third-year students from NTU and Festive Road take to the streets with their creations specially-made for the Puppet Festival. From 7pm

Large-scale interactive projections from the National Videogame Arcade – As evening falls, marvel at the amazing, large-scale projections onto the City Arts’ Dome. From 7pm

Please note the programme running order may be subject to change.

See the line-up for Saturday and Sunday.

Get Directions on Google Maps 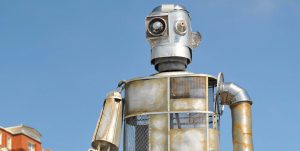 From Friday to Sunday, the Old Market Square becomes a… 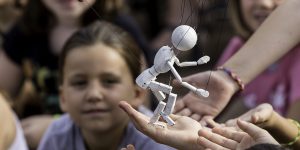 From Friday to Sunday, the Old Market Square becomes a…

£
Back to all events