This post is over 2 years old. Some of the content might be out of date. If your after something more up date, check out our latest posts. If you want to find out more about the content on this page, contact us.

Rachel Reeves has written an article on the Power of Puppetry to explore human emotions and experiences:

Lily and I had a lot in common – both brown-haired young women struggling to come to terms with the recent deaths of our fathers. But there were two main differences. One, Lily was about to seek her father on a journey to the land of the dead. And this was possible because two, she was a puppet.

Before watching the show at the Edinburgh Fringe Festival, I had been sceptical about how well a marionette could express something as deep and harsh as grief. Lily’s dreamlike world had scarlet ribbons for blood, oceans of blue buttons, and the puppets were stiff faced and clearly operated by strings and puppeteers. But it moved me to tears, and led me to wonder how something so stylised could reach the most real and raw of human emotions and experiences.

It’s the kind of question the first ever Nottingham Puppet Festival will be exploring this month, with numerous puppet shows and related talks.

Puppets are sometimes dismissed as childish. But just as children enjoy Sesame Street and Sooty, so do adults flock to the National Theatre’s acclaimed drama War Horse, or the satirical and super-sweary Avenue Q. Audrey II in Little Shop of Horrors was comic and terrifying, the Muppets and Thunderbirds are beloved worldwide and David Bowie ruled a puppet empire in the classic fantasy film Labyrinth. So what is it about puppets that makes them so expressive?

Irish author and puppeteer Corina Duyn, who will appear at the festival’s Writing for Puppetry and Puppetry, Disability and Heatlh talks, uses puppets to express and explore the issues she faces living with ME (also known as Chronic Fatigue Syndrome).

“I was the facilitator of a short film called Life Outside the Box, as part of the Artists in the Community scheme with the Irish Wheelchair Association,” she says. “We made nine puppets and it showed them stepping out of a box. It was like us stepping out of society’s disability box. There is a definite theme of life and movement in my work with puppets.”

As Corina cannot hold the cross of a marionette puppet for very long, she designed a new type of puppet, with a vertical back bar, that she can use properly. One such creation is Póilin, who will accompany her to Nottingham.

And when her application for a grant to assist with her upcoming speaking tour (including Nottingham) was rejected, her puppets came out to create a protest scene. 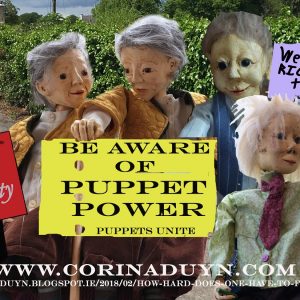 “Puppets can be radical,” she says. “They can say what they like and tell the truth. Nobody’s going to argue with them.”

And how else can puppets be used to express the issues surrounding disability?

“I once did a drawing of a puppet with strings,” Corina recalls. “I was thinking: who is holding my strings, holding me up, controlling me?” The text on the drawing states: “The puppet is me with ME. I have little or no control over my body. Who is the hand who keeps me upright…Can I become the hand over ME, have control over me?”

Elsewhere, too, puppets bring out people’s emotions. Marie Orr is the Activities Co-Ordinator at Aughton Park, a residential and dementia care home in Lancashire and part of the national charity MHA.

“The response I get when I show residents my puppets is amazing,” she says. “A lady with severe dementia at the home has terrible mood swings, but if I talk to her through the puppet, her mood changes and it’s as if she is a child again and relaxes, the staff notice the change in her.”

“I have a lot of characters. Pedro is a violinist and I play music to accompany him. And Florrie is a cleaning lady. She dances, she cleans people’s walking sticks and Zimmer frames and sings, ‘If I knew you were coming I’d have baked a cake.’

“People with dementia go back to their childhood days so I think there is a connection.”

I think about Lily again. Perhaps she was able to embody the abstract of grief precisely because her world was so fantastical that it could explore secret, darker emotions. Perhaps the fact that she wasn’t real made it easier for me, and all other audience members, to project our own feelings on to her – she had some sort of neutrality and could be any one of us.

From drama to comedy, disability to dementia, puppets have a unique place in the arts – and the Nottingham Puppet Festival will explore all these possibilities.

‘The Dancers’ by Ahau Marionetas